July 08, 2020
• The Ministry's initiatives contributed to enhancing the purchasing power of citizens and residents and reducing the financial burden of unjustified hikes in the prices of various commodities, especially basic consumer goods.
• Tightening control over the cost of fish, seafood, vegetables and fruit ensured success in achieving low and stable prices for quality products.

The Ministry of Commerce and Industry highlighted the data outlined in the Consumer Price Index report during the blessed month of Ramadan for the year 1441 AH, which has been issued by the Planning and Statistics Authority for the period between April 23, 2020 and May 24, 2020.

In this context, the significant decrease in the CPI index during the Holy Month was noted. The Ministry noted that the general decline in consumer prices – particularly in the price of food and beverages, one of the most important categories covered in this report – reflects the effectiveness of the its efforts and initiatives to regulate prices. These measures were taken in a bid to bolster the purchasing power of citizens and residents, and to alleviate the financial burden resulting from the unjustified hike in the price of various commodities, especially basic consumer goods.

The Ministry noted that the CPI clearly demonstrated that consumer goods prices trended downward since March, and declined further during the holy month of Ramadan 1441 AH (corresponding to April 23 – May 24, 2020).

The CPI covered 12 major categories, outlined in the following table. These include food and beverages, which represent of the most important categories in the report, and account for 13.45% of total family spending. The category covers various food products, including Ramadan commodities, and constitute 13% of a total basket – the equivalent of 557 products.

Table (1) illustrates the consumer price index from January to May 2020. Graphs (1,2,3,4,5,6,7,8) show the impact of inspection campaigns on the prices of fresh commodities, with the price index for food and beverages declining during Ramadan

The Ministry stressed that the latest data reflects the success of its efforts during the holy month of Ramadan of the year 1441 AH. Each year, the Ministry issues a number of important decisions that fall within the framework of its Ramadan initiatives. Among the most prominent was the joint national initiative between the Ministry of Commerce and Industry, the Ministry of Municipality and Environment, and Widam Food Company, which involved bolstering local production and subsidising sheep meat prices during Ramadan 1441 AH, in order to ensure the availability of the product for citizens at reasonable prices, while also enhancing the balance between supply and demand.

The Ministry had also announced the launch of its discounted consumer goods initiative for citizens and residents. The programme covered more than 500 products, and included basic commodities such as flour, sugar, rice, pasta, chicken, oil, milk, and other food and non-food items whose consumption tends to increase during Ramadan.

This joint community initiative between malls and suppliers contributed significantly to the decline in food and consumer prices referred to in the CPI index for the month of June. In this regard, the Ministry has been keen to engage and coordinate with suppliers to identify and provide in-demand products at the most appropriate prices during Ramadan. The list of discounted consumer goods was circulated to all major malls across the country.

The Ministry also intensified its inspection campaigns across all markets and commercial activities to uncover and crack down on violations, in a bid to protect consumer rights. In this context, the Ministry intensified its monitoring of fish, seafood, vegetables and fruit prices, in line with the daily price bulletin it issues in this regard, which resulted in the Ministry’s success in maintaining low and stable prices for these products.

In parallel, the Ministry sought to monitor and update the level of strategic reserves of food and consumer goods, while assessing production and consumption levels as well as the state’s needs. The Ministry also assessed suppliers’ requests for price increases, and prepared a list of goods and services in this regard to determine proposed increase and profit rates in proportion to the purchasing power of consumers.

The initiatives launched by the Ministry during the holy month of Ramadan for the year 1441 AH fall in line with its efforts to maintain efficient markets and to balance supply and demand, resulting in the provision of products at appropriate prices for producers, suppliers and consumers. The Ministry has been also monitoring market trends and changes in demand to ensure that merchants refrain from increasing prices prior to obtaining the approval of the Committee tasked with setting maximum prices and profit ratios.

The Ministry also seeks to ensure that any increase in prices takes place in accordance with the rules and regulations outlined in Ministerial Resolution No. (8) of 2013 on regulating the increase in the prices of goods and services, especially article No. (2) of the resolution.

The Ministry is also responsible for regulating markets in its field of competence, and is taking the necessary measures to protect consumers in accordance with Law No. 8 of 2008 on consumer protection and its executive regulations. These measures include combating commercial fraud, protecting consumers, preventing monopolistic practices and outlining general policies for manufacturing and developing national industries.

H.E. the Minister of Commerce and Industry meets the Secretary General of the Cooperation Council for the Arab States of the Gulf

H.E. the Minister of Commerce and Industry reiterates Qatar’s commitment to a multilateral trading system, and to strengthening international cooperation frameworks, to ensure the continuity of trade as the engine for economic recovery 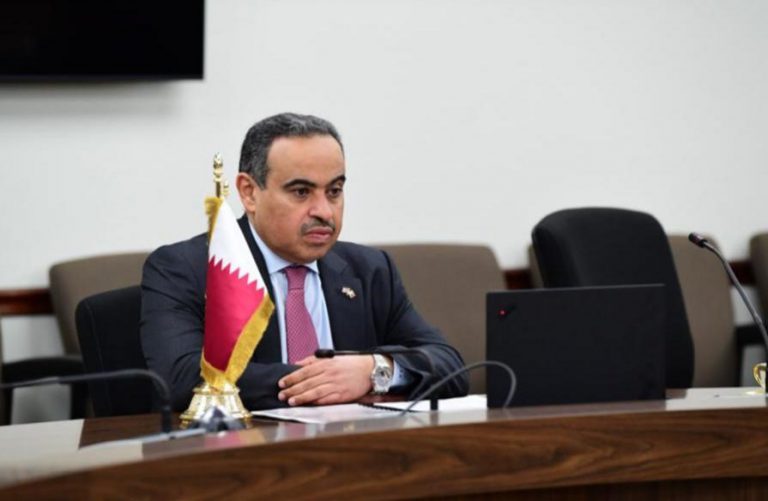 H.E. the Minister of Commerce and Industry holds meetings on the sidelines of the third Qatar-US Strategic Dialogue