H.E. Minister of Commerce and Industry: Qatar attaches great importance to supporting the economies of its strategic partners around the world

Discussions touched on cooperation prospects in various sectors of shared interest to both countries.

In his opening remarks, H.E. said Qatar and Russia have long enjoyed friendly relations that were further strengthened since the latest visit by His Highness Sheikh Tamim Bin Hamad Al-Thani, the Amir of the State of Qatar, to Moscow in March 2018.

H.E. explained that Qatari-Russian bilateral relations have also gained momentum after the signing of agreements and memorandums of understanding in the industrial, trade, investment, economic, energy, and infrastructure fields, among other vital areas, including an agreement for the establishment of a research center by Rosneft International at Qatar Science and Technology Park.

H.E. urged joint efforts at the governmental and private sector levels to expand trade and investment activities, and bolster growth to reflect the economic potential that both countries enjoy.

H.E. also commended the efforts exerted by both sides to achieve a qualitative leap in the level of investment flows between both countries.

In this context, H.E. emphasized Qatar’s keenness to invite Russian private companies and investors, to contribute to the country’s journey towards achieving its National Vision 2030, and to tap investment opportunities in sports industries and projects associated with preparations to host the 2022 FIFA World Cup.

H.E added that Qatar attaches great importance to supporting the economies of its strategic partners around the world, particularly Russia, where Qatar has sought to diversify its investments into strategic sectors,  noting that the Russian and Qatari investment authorities are engaged in dialogue to identify new and promising projects that will benefit both countries’ economies and serve their common interests.

H.E. explained that Qatar pursued in recent years the implementation of major development projects, which has cemented the country’s position as one of the region’s most stable, competitive, and growth-oriented economies, noting that Qatar’s economy has witnessed a significant boost as new national companies went public, and more than 823 Qatari companies was established in the field of food production, services, and manufacturing industries.

H.E. added that industrial cities are also being expanded to feature 769 industrial land plots, as work continues to complete 337 projects in the manufacturing sector, and create promising investment opportunities in non-oil sectors.

Touching on Qatar’s legislative environment, H.E. said Qatar has developed business legislations and regulations to allow foreign investors up to 100% ownership in all economic and commercial activities, in addition to allowing non-Qatari investors and companies to invest in the strategic real estate sector, and own properties in several vital economic and tourism areas across the country.

H.E. added that Qatar has also approved a draft law regulating public and private partnerships with the aim of offering new opportunities to the private sector, and involving companies in the implementation, construction, financing, and operation of the state’s various facilities, and sustainable development projects.

H.E. concluded his remarks by expressing hope that the fourth session of the Qatari- Russian Joint Committee contributes to expanding economic, trade, and investment cooperation and bolstering bilateral cooperation.

During the committee’s meeting, both sides discussed the progress achieved in terms of implementing the recommendations outlined during previous sessions and plans to expand existing projects, as well as mechanisms to overcome obstacles.

The two sides agreed to take the necessary steps to move forward with efforts aimed at strengthening trade and investment cooperation in a bid to bolster bilateral trade and streamline the flow of goods, services and investments between the two countries.

At the end of the session, H.E. Mr. Al-Kuwari and H.E. Mr. Novak, signed the minutes of the meeting. Both officials also attended the signing of a 2019-2023 development plan by the Qatari-Russian Joint Committee for Trade, Economic, and Technical Cooperation.

H.E. Minister of Commerce and Industry and Acting Minister of Finance participates in panel discussion organized within SPIEF 2021 in partnership with VTB Bank 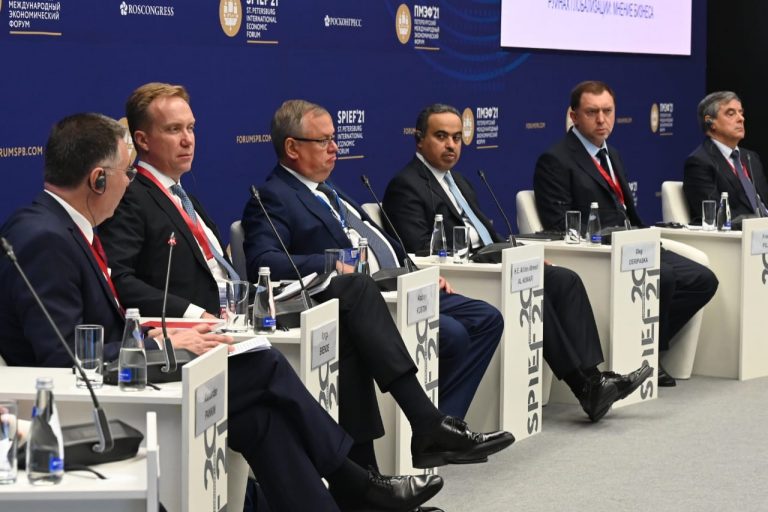