His Excellency Mr. Ali bin Ahmed Al-Kuwari, Minister of Commerce and Industry, has participated in a panel discussion on food security at the Kuala Lumpur 2019 Summit that was held in the Malaysian capital from 18-21 December 2019, under the title “The Role of Development in Achieving National Sovereignty”.

In his remarks, H.E. highlighted the importance of this event, which sheds light on the topic of food security, a key issue given today’s global challenges and increasing protectives measures on the international trade front, particularly the restrictions imposed on the export of food commodities, which negatively impact the food security of countries that import these products.

H.E. highlighted the widening food security gap in different regions around the world with increased dependence on external sources to meet the nutritional needs of populations and the decline in the contribution of the agricultural sector to GDP.

H.E. called for the adoption of a comprehensive strategic approach to achieve food security and the implementation of effective mechanisms to ensure the sustainability of supplies, which contributes to reducing food price fluctuations especially when it comes to basic commodities.

H.E. noted that food security represents a top priority for Qatar on the developmental level and is one of the main pillars of the country’s security and economic independence when it comes securing the needs of future Qatari generations in line with the National Vision that aims to transform Qatar in 2030 into a developed country capable of achieving sustainable development and ensuring a decent living for its people for generation to come.

H.E. explained that the unfair blockade that has been imposed on the country since 2017 presented an important opportunity for Qatar to review its economic strategies and policies particularly plans to achieve food security.

H.E. said Qatar laid the foundations of its National Food Security Strategy 2019-2023 to unite efforts among concerned authorities, optimize the use of the country’s natural and water resources, fortify the food security system against shocks during emergencies, identify priorities in terms of food security initiatives and projects, protect and promote local production, improve food quality and safety and maintain a safe and healthy strategic stock.

Touching on the four pillars of Qatar’s National Food Security Strategy, H.E. said Qatar sought to enhance the contribution of private sector to the implementation and development of food security projects and has pitched several projects to investors especially in the agricultural and industrial fields.

On the industrial level, H.E. said investments in the food industries sector also increased 126 percent to QR 5.2 billion in 2019 compared to 2.3 Billion in 2016.

H.E. added that a set of mechanisms has also been established to take advantage of Qatar’s advanced infrastructure and strategic location to locally manufacture and produce food and agricultural products among other items and to export these products into regional and international markets.

In this regard, H.E. highlighted the journey of Baladna Food Industries, which is one of the most successful national ventures on the industrial level.

H.E. said the company contributed to Qatar’s self-sufficiency in terms of dairy products at 100%, noting that a memorandum of understanding was signed between Baladna and the Malaysian governmental Felcra Berhad to raise the industrial production capacity of both sides.

H.E. also commended the efforts of the governmental and private sectors, which bolstered Qatar’s strategic position in the field of food security as the country ranked first in the Arab world and 22 globally in terms of food growth, according to the latest 2018 World Food Index.

Touching on Qatar’s efforts within the framework of the WTO to achieve food security, H.E. said Qatar has pursued efforts to enhance and protect its national economic gains in the field of food security and has sought to join the list of net food-importing developing countries (NFIDCs) in the World Trade Organization since 2014.

On March 9, 2016, Qatar submitted an application to the WTO’s Agriculture Committee to join the NFIDCs list, which offers its members with a set of specific guarantees to enhance and protect their food security, H.E. said.

H.E. added that Qatar has joined a WTO informal group, which brings together a number of countries that aim to reduce discriminatory restrictions such as Singapore, Switzerland, Japan and other countries in cooperation with the European Union.

In this context, a joint paper was presented on the issue of export restrictions during the meeting of the WTO’s Agriculture Committee, H.E. said, noting that the paper highlighted the importance of food security to many member states, particularly least developed countries and net food importing countries.

H.E. said the paper also referred to the restrictions imposed on the export of foodstuff that would affect the food security of importing countries and contribute to higher food prices globally.

H.E. explained that the unjust blockade imposed on Qatar is one of the most pronounced manifestations of protectionist tendencies that have been adopted by some countries and represent a major challenge not only on the economic level but also on the security level.

H.E. called for the establishment of a global system that ensures the sustainability of food supplies, especially for countries that depend on imports to secure their needs.

To this end, H.E. said Qatar has endeavored to strengthen cooperation with various parties to develop the international trade system for agricultural products and to enhance collaboration with international organizations with an interest in food security, including the Food and Agriculture Organization (FAO), the Organization for Economic Co-operation and Development (OECD), the G20 and the Agricultural Market Information System (AMIS).

During the Ministerial meetings of the Standing Committee for Economic and Commercial Cooperation (COMCEC), Qatar had submitted a proposal to launch a joint initiative aimed at establishing an agricultural commodities exchange for Islamic countries, which would facilitate intertrade, H.E. said.

H.E. added that Qatar looks forward during this summit to prioritize the promotion of agricultural investments in Islamic countries and to encourage joint investments in this sector with a focus on the concept of value chains between neighboring countries to enhance regional integration.

H.E. wrapped up his remarks by urging joint efforts to devise innovative and effective solutions that enhance Islamic countries’ growth prospects to ensure a better future for their people.

The Kuala Lumpur Summit is an international platform that aims to achieve a number of goals, mainly to shed light on Islamic civilization and discuss solutions to the issues facing Islamic nations in the context of a contemporary and comprehensive understanding of Islamic values and through dialogue between leaders, scholars and thinkers in the Islamic world. 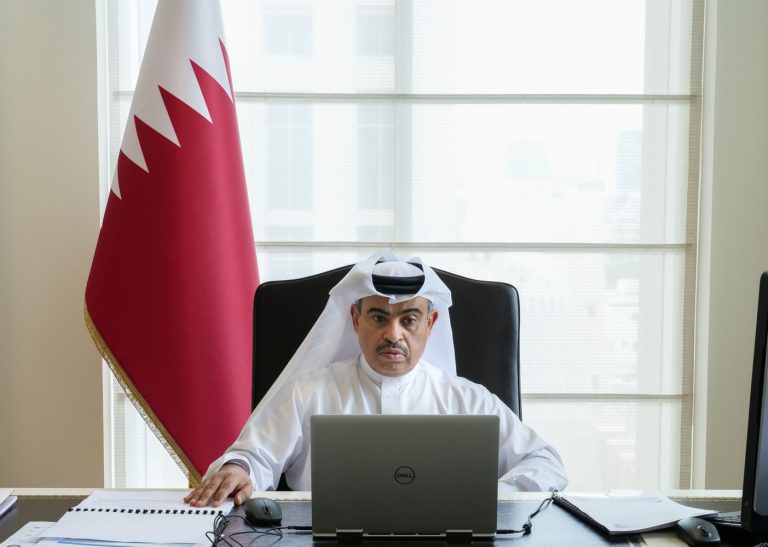